Mallika Sherawat had something lethal in her Cannes wardrobe – a 22 ft python that she draped around herself on Sunday.

And just to make sure no one misses her latest stunt to promote the snake drama Hisss, the Bollywood Bombshell has been tweeting about it for days: “with the Producers of Hisss, makin Hissstory

Her other tweets on the subject include: “And now for a very special and private photo shoot in Cannes with my date, Rudy the Sssnake” and “All the Sssnakes have just entered the Majestic Hotel in Cannes! Hissstory is being made

Mallika Sherawat is at the Cannes Film Festival to unveil the first look of her home production Hisss. According to reports, her Love, Barack will also be introduced at the gala event. Directed by Jennifer Lynch and produced by Govind Menon and Vikram Singh Lamba of Split Image Pictures, Hisss also stars Irrfan Khan, Divya Dutta and American character actor Jeff Doucette.

In fact Mallika has much to cheer about at Cannes this year. A French fashion website reportedly voted her among the 13 best-dressed celebs at the Festival. While opinion remains divided about her status as style icon, the actress was clearly over the moon for being noticed above other beauties like Aishwarya and Deepika: “WOW! 1 of the 13 best-dressed @ Cannes?! and me the only Indian listed!?” 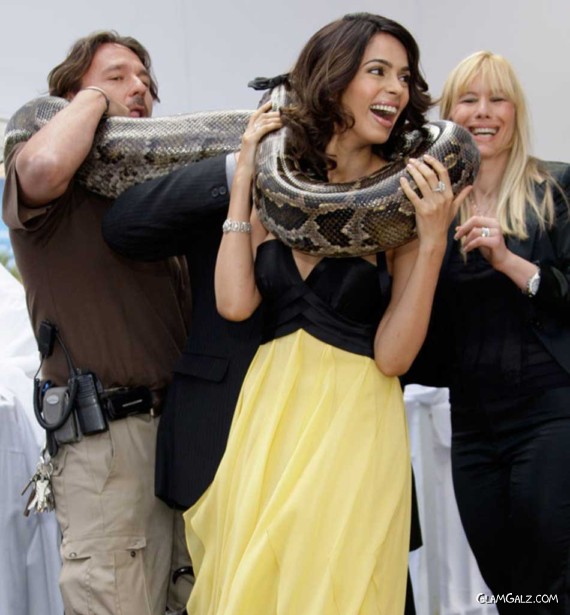 Sunny At The Ramp For Victoria’s Secret Look