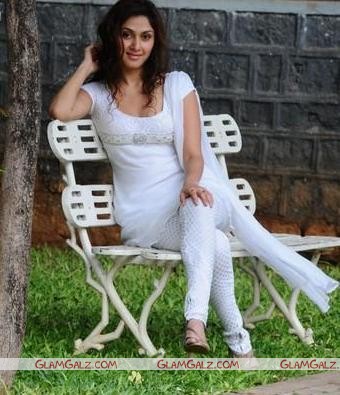 Manjari had also signed for a movie right after her maiden venture which for unexplained reason didn’t make it until now. Thats right, the movie that she signed three years ago got finally made that released recently receiving fabulous reviews. Jaane Tu Ya Jaane Na somehow turned out to be Manjari’s break as expected.

She is the surprise element in the Aamir Khan produced ‘Jaane Tu Ya Jaane Na’, which marks the debut of the superstar’s nephew.Even as the media trains its focus on Imraan and the film’s female lead Genelia D’Souza in the run up to the release of the film, Manjari Fadnis, who plays a key role, has been kept far away from media glare.

Manjari, the luscious damsel was finally noticed for her suave acting skills in JTYJN and is yet to be seen in the hilarious ‘ I’m 24 ‘. Thats not it, Manjari had also accepted roles downsouth debuting in Tamil & Telugu with ‘Muthirai’ and ‘ Sidhu From Sikakulam ‘. The movie is still in production and there may not be much talk about it but undoubtedly Manjari looks gorgeous as ever.