These girls look so sexy Just can not choose which are more beautiful and attractive, they which are drawn or the ones that are real.One more thing: If You have an idea to add more comic girl heroes with movie twins, leave your idea in comments and we will update out post.

Black Widow (Чёрная вдова, Chyornaya vdova) (Natalia Natasha Alianovna Romanova, also known as Natasha Romanoff) is a fictional character in the Marvel Comics Universe. She was created by editor and plotter Stan Lee, scripter Don Rico and artist Don Heck, and first appeared in Tales of Suspense #52 (April 1964). Natasha Romanoff is featured in the 2010 motion picture Iron Man 2, where she is played by Scarlett Johansson. (source) 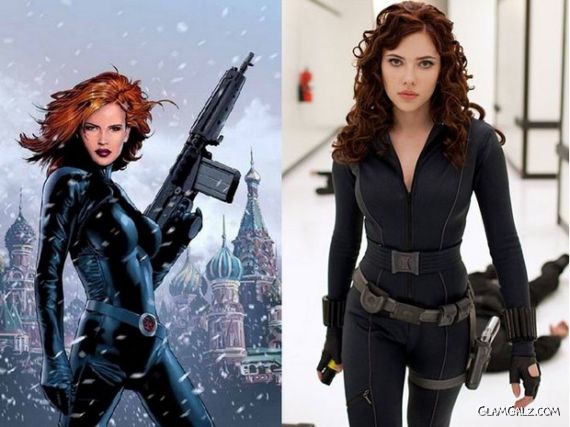 Vampirella is a fictional character, a comic book vampire heroine created by Forrest J Ackerman for Warren Publishings namesake black-and-white horror-comics magazine, and developed by Archie Goodwin with artists Frank Frazetta and Tom Sutton. Vampirella first appeared as a horror-story hostess in Vampirella #1 (Sept. 1969), continuing in that capacity through issue #8 (Nov. 1970) when she was revamped as a leading character. (source) 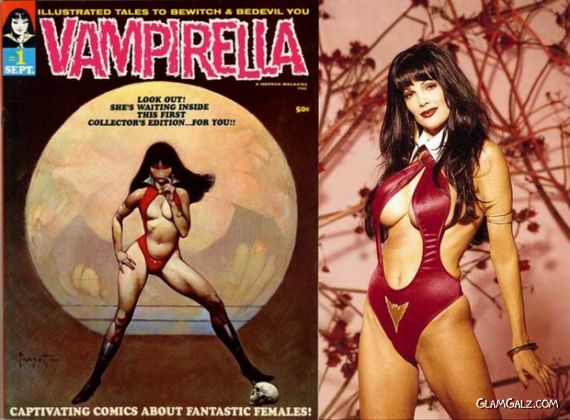 Power Girl (real name Kara Zor-L, also known as Karen Starr) is a DC Comics superheroine, making her first appearance in All Star Comics #58 (January/February 1976). Power Girl is the Earth-Two counterpart of Supergirl and the first cousin of Kal-L, Superman of the pre-Crisis Earth-Two. The infant Power Girls parents enabled her to escape the destruction of Krypton. Although she left the planet at the same time that Superman did, her ship took much longer to reach Earth-Two. (source) 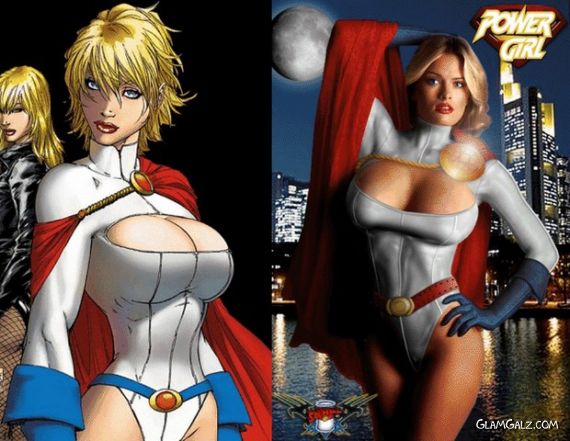 Susan Sue Storm Richards (also known as Invisible Girl and later, Invisible Woman) is a fictional character, a Marvel Comics superheroine created by writer Stan Lee and artist/co-writer Jack Kirby. The character first appeared in Fantastic Four #1 in November 1961, and was the first female superhero created by Marvel in the Silver Age of Comics. Like the other founding members of the Fantastic Four, Sue received her powers after being exposed to a cosmic storm. Her primary power deals with light waves, allowing her to render herself and others invisible. However, she can also project powerful fields of invisible psionic energy which she uses for a variety of offensive and defensive effects. Sue plays a central role in the lives of her brother, her husband, her children (Franklin Richards and Val Richards), and her friend, Ben Grimm. (source) 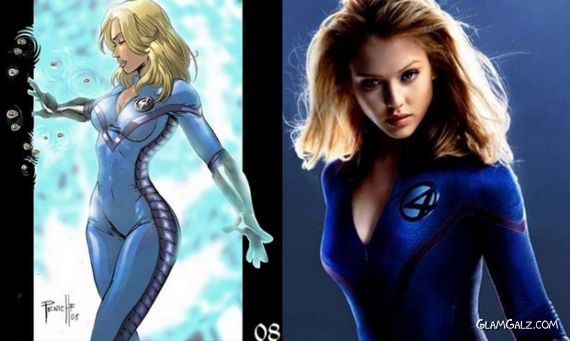 Catwoman is a fictional character associated with DC Comics Batman franchise. The supervillain was created by Bill Finger and Bob Kane, partially inspired by Kanes second cousin by marriage, Ruth Steel. The original and most widely known Catwoman, Selina Kyle, first appears in Batman #1 (Spring 1940) in which she is known as The Cat. She is not an adversary of Batman, as such, but is known for having a love-hate relationship with him. In her first appearance, she was a whip-carrying burglar with a taste for high-stake thefts. For many years Catwoman thrived but from September 1954 to November 1966 she took an extended hiatus due to the newly developing Comics Code Authority in 1954. These issues involved the rules regarding the development and portrayal of female characters that were in violation with the Comic Code. (source) 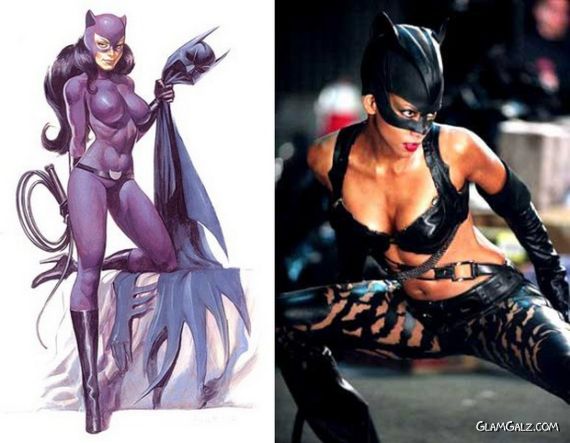 Wonder Woman is a DC Comics superheroine created by William Moulton Marston. She first appeared in All Star Comics #8 (December 1941). The Wonder Woman title has been published by DC Comics almost continuously since the companys 1944 inception, except for a brief hiatus in 1986. Wonder Woman is an Amazon (based on the Amazons of Greek mythology) and was created by Marston, an American, as a distinctly feminist role model whose mission was to bring the Amazon ideals of love, peace, and sexual equality to a world torn by the hatred of men. Her powers include superhuman strength, flight, super-speed, super-stamina, and super-agility. She is highly proficient in hand-to-hand combat and in the art of tactical warfare. She also possesses an animal-like cunning and a natural rapport with animals, which has in the past been presented as an actual ability to communicate with the animal kingdom. She uses her Lasso of Truth, which forces those bound by it to tell the truth, a pair of indestructible bracelets, and an invisible airplane. (source) 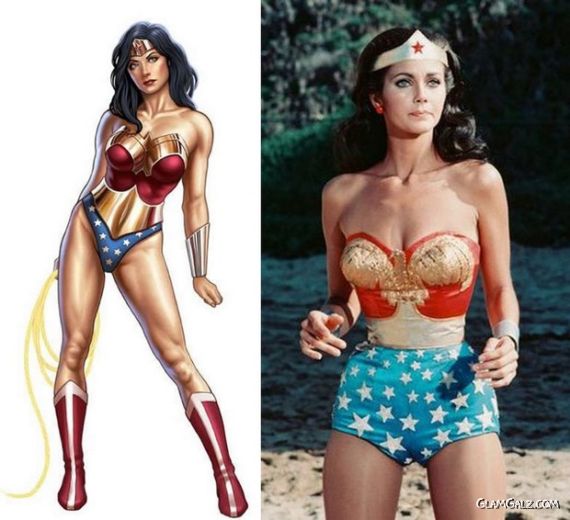 Elektra Natchios, usually referred to only by her first name Elektra, is a fictional character in publications from Marvel Comics. Elektra is a kunoichi  female ninja assassin  of Greek descent. She wields two bladed sai as her trademark weapon. She is a love interest of the superhero Daredevil, but her violent nature and mercenary lifestyle divide the two. She is one of Frank Millers best-loved creations, and subsequent writers use of her is controversial as Marvel had originally promised to not resurrect the character without Millers permission. She has also appeared as a supporting character of the X-Mens Wolverine. In the 2003 film Daredevil and its 2005 spinoff, Elektra, the character is portrayed by Jennifer Garner. (source) 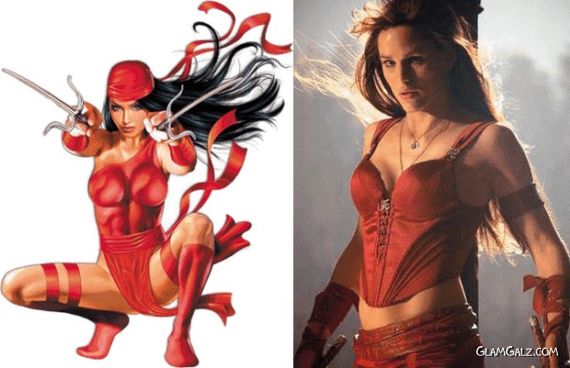 Mystique (Raven Darkhölme) is a fictional character associated with the Marvel Comics franchise, X-Men. Originally created by artist David Cockrum and writer Chris Claremont, she first appeared in Ms. Marvel #16. Throughout most of her history, Mystique has been a supervillain, founding her own Brotherhood of Mutants and assassinating several important people involved in mutant affairs. Mystique herself is a mutant, a shapeshifter whose natural appearance includes her blue skin and yellow eyes. At one point, she mentioned she is over 100 years old. Mystique is the mother of the villain Graydon Creed, the X-Men hero Nightcrawler, and adoptive mother of the hero Rogue. She was forced to abandon Nightcrawler, but raised Rogue for a number of years and the two women have mixed feelings towards one another. (source) 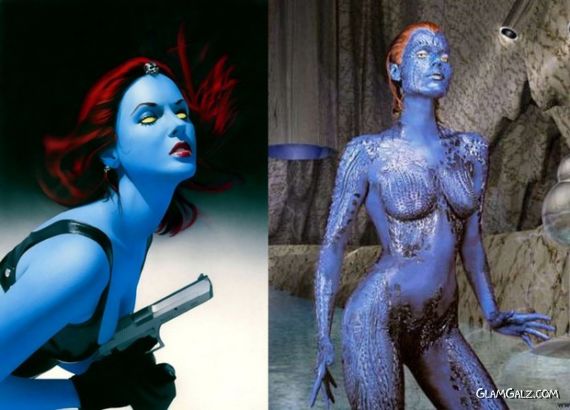 Rogue is a fictional character in most of the Marvel Comics award-winning X-Men related titles. She was created by author Chris Claremont and artist Michael Golden, and debuted in Avengers Annual #10 (August 1981) as a villain. Rogue was born as a mutant. More so than most, Rogue considers her powers a curse: she involuntarily absorbs the memories, physical strength, and (in the case of superpowered persons) the abilities of anyone she touches. For most of her life, this potentially fatal power prevented her from making any physical contact with others, including her longtime on-off love interest, Gambit, but after many years Rogue gained full control over her power for the first time in years. (source) 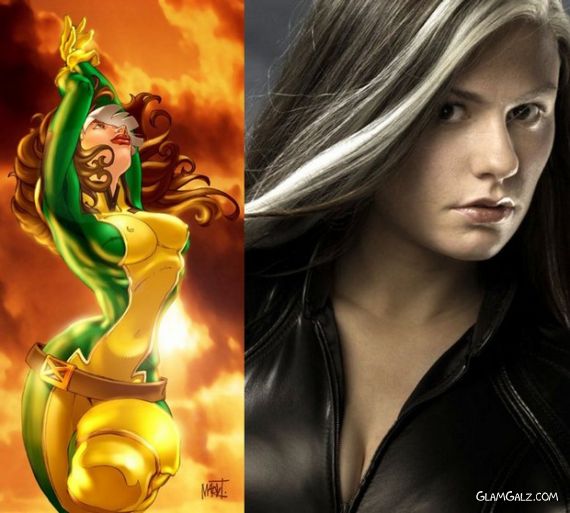 Character of Watchmen. Laurie Juspeczyk, the second Silk Spectre, is the daughter of Sally Jupiter, the first Silk Spectre. Lauries mother apparently wanted her to follow in her footsteps and so she fought crime for ten years before the Keene Act banned vigilantes. Unlike the other protagonists, Silk Spectre was not based on a particular Charlton character, although her relationship with Dr. Manhattan is similar to that between Captain Atom and the heroine Nightshade. Moore felt he needed a female hero in the cast and drew inspiration from comic book heroines such as Black Canary and Phantom Lady. (source) 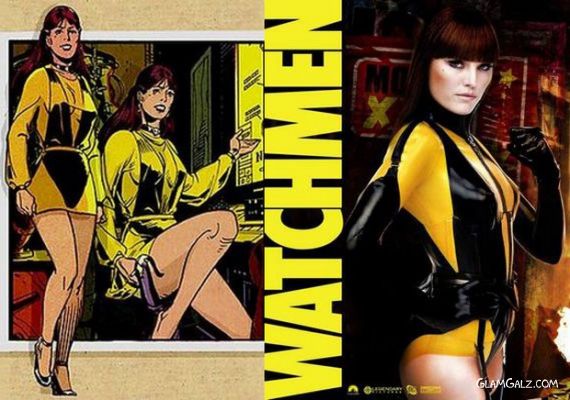 Bailee Madison Spotted Out With Her Boyfriend And Dog In Toronto

Eva Longoria At The Global Gift Gala 2017 In Madrid